The Tuggeranong Lake Carers’ (TLC), lake cleanup held on the 4th March, as part of the Cleanup Australia was a fantastic success. The partnerships the TLC has formed with the Tuggeranong Community Council (TCC), the Southern ACT Catchment Group (SACTCG), Lake Tuggeranong Sea Scouts and the Tuggeranong Rowing Club has gone from strength to strength with more people participating and more bags of rubbish collected each year.  This year the Lake Tuggeranong Sea Scouts took on a more active role looking after the sign on and activities at the Sea Scout Hall, thus allowing us to expand and set up another sign on site across the lake at the back of the library.

The result was that we had approximately 90 people working around the lake including many scouting and cub families, local residents as well as people from various suburbs around Tuggeranong. We also had members of the rowing club out on the lake itself collecting debris the week before the cleanup. We collected over 60 bags of rubbish plus items such as motorbike wheels, chairs, signs, carp, as well as an old couch, which was removed from one of the Islands on the lake by the Lake Tuggeranong Sea Scouts.

It was a very sociable event with many staying on to partake of the free BBQ put on by the Tuggeranong Community Council – prepared and cooked by Frank Vrins, and Beverly and Max Flint.  The Lake Tuggeranong Sea Scouts, organized by Scout Conor McLaughlin, did a great job and had over 30 scouts, cubs, joeys and parents helping out, including supplying a car, trailer and driver to go around to pick up rubbish left in various pre determined points to bring it back to the Scout Hall.

Other groups who supported us included:

Overall it was a great success and showed how various groups working together can achieve success. 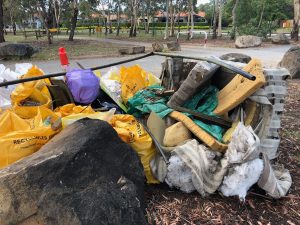 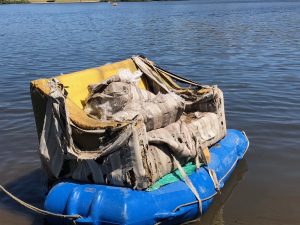