The result was that we had about 50 people working around the lake including Scouting and Cub families (including some from the Richardson Scouts), local residents as well as people from various suburbs around Tuggeranong. We also had members of the Tuggeranong Rowing Club and the Sea Scouts. We always appreciate support from our local members Nicole Lawder MLA out on the lake itself collecting debris and our new Federal member for Bean, David Smith MP. While we only collected about 30 bags of rubbish, we also collected a number of large drums, a mattress and a metal frame which were removed from one of the Islands on the lake by the Tuggeranong Sea Scouts. They also picked up the collected rubbish left in various pre-determined points and brought it back to the Scout Hall for general department collection on Monday.

It was good to hear people commenting that the rubbish around the lake seems to be less each year, probably partly because of the new “Container Deposit” scheme and the fact that people living in the areas are now more aware protecting the environment.

It was a very sociable event with many staying on to partake of the free BBQ put on by the Tuggeranong Community Council – prepared and cooked by the TCC President, Jeff Bollard.

Other groups who supported us included:

Overall on the day it showed how various groups working together can achieve a very successful day. 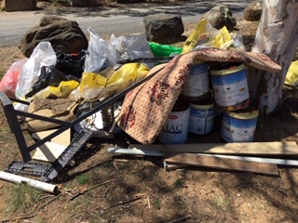